What is the effect of cannabinoids?

Cannabinoids are a group of lipophilic compounds that all interact with cannabinoid receptors (CB-R). Components of the endocannabinoid system (ECS) include, for example, the classical G protein-coupled cannabinoid receptors CB 1 -R and CB 2 -R, CB 1 -R in the brain, liver, reproductive system, skeletal muscle and heart The presence in the vascular system, including the pulmonary vessels, has been demonstrated.

Currently, no treatment can completely cure pulmonary hypertension (PH), which can lead to right ventricular failure and thus death. Cannabinoids, a group of lipophilic compounds that interact with cannabinoid receptors, have potential beneficial effects on pulmonary circulation and pH.

Pulmonary hypertension (PH) refers to a group of clinical symptoms caused by elevated blood pressure (BP) in the pulmonary circulation. According to the latest classification, PH is diagnosed when the mean pulmonary arterial pressure (mPAP) at rest exceeds 25 mmHg, as confirmed by right-sided cardiac catheterization . The World Health Organization (WHO) classifies PH into 5 groups: pulmonary arterial hypertension (PAH), PH due to left-sided heart disease, PH due to chronic lung disease, chronic thromboembolic PH, and PH of unknown and/or multifactorial pathology . PH often leads to heart failure due to excessive overloading of the right ventricle (RV), resulting in death of the patient. The development of PH is complex and its pathogenesis includes vascular endothelial cell dysfunction, excessive pulmonary artery constriction, vascular and RV remodeling (myocyte proliferation and hypertrophy), inflammation, oxidative stress, and thrombosis. Cannabinoids have been used for recreational and medicinal purposes for centuries. When smoked, cannabinoids primarily cause changes in the central nervous system. Additionally, reports indicate that cannabinoids affect the respiratory and circulatory systems. Cannabis has analgesic, anticonvulsant and antiasthmatic properties. Research on the effects of plant-derived cannabinoids (phytocannabinoids) and endocannabinoids (arachidonic acid derivatives) produced by mammalian organisms has recently received considerable attention. The endocannabinoid system (ECS) is known to be upregulated in certain types of hypertension, including PH, and components of the ECS may have antiproliferative effects.

What are the effects of cannabinoids on blood vessels throughout the body? Can it be used as an adjunctive treatment for PH?

Cannabinoids in the Cardiopulmonary System

Cannabinoids are a group of lipophilic compounds that all interact with cannabinoid receptors (CB-R). Components of the endocannabinoid system (ECS) include, for example, the classical G protein-coupled cannabinoid receptors CB 1 -R and CB 2 -R, CB 1 -R in the brain, liver, reproductive system, skeletal muscle and heart The presence in the vascular system, including the pulmonary vessels, has been demonstrated.

Cannabinoid effects on the whole body

ECS is unlikely to be a major element regulating cardiovascular parameters under physiological conditions, although it plays an important role in pathological states. The effects of cannabinoids on blood vessels have been studied since the 1990s, and new research is emerging. Cannabinoids in the systemic circulation cause vascular relaxation, which was extensively described by Stanley et al. In this review, we focus on papers published after Stanley et al. The relaxation induced by various cannabinoids may depend on the endothelium and/or receptors (eg, CB1-Rs). The potency of individual compounds depends on the vascular bed and species.

ECS is located in the pulmonary circulation, and its endocannabinoid component causes systemic vasodilation, resulting in a drop in blood pressure. Therefore, the question is whether these components also have a hypotensive effect on the pulmonary circulation. Additionally, cannabinoids can be administered by inhalation. From a pharmacological point of view, this delivery method could accelerate their action in the pulmonary circulation. When considering this question, attention should be paid to the similarities and differences between systemic and pulmonary vasculature, as these factors can influence the mechanism of action of cannabinoids. An extremely important element of the pulmonary vascular structure is the endothelium, which, despite being a mechanical barrier, is also involved in maintaining proper vascular tone by synthesizing vasoactive compounds . Under normal conditions, the pulmonary circulation is a low-pressure, low-resistance, high-volume system. One of the most important features distinguishing systemic and pulmonary circulation is the presence of a mechanism to dilate blood vessels during hypoxia. Systemic arteries relax as oxygen levels decrease, while pulmonary vessels constrict due to hypoxia and increased blood oxygenation, delivering blood to more oxygenated areas. Hypoxia causes hypoxic pulmonary vasoconstriction (HPV) and hypoxic ventilatory responses.

As in the systemic circulation, cannabinoids have also been shown to have vasodilatory effects in isolated pulmonary vessels. Cannabinoids exhibit concentration-dependent vasorelaxation in human pulmonary arteries (hPA). Notably, the most commonly used pulmonary vasoconstrictors mirror those involved in the pathophysiology of PH. LPI showed the strongest vasodilatory effect, but this effect may be due to the use of phenylephrine to constrict blood vessels. Furthermore, CBD and LPI cause time-dependent relaxation of human pulmonary vessels. A single concentration of CBD and LPI produced an initial relaxation of the vessels of about 20% after 15 minutes, increasing to about 70% after 120 minutes.

Cannabinoids in PH - in vivo and in vitro studies

Although the effects of cannabinoids on isolated blood vessels have been well studied, in vivo studies are still rare. ECS may play an important role in PH related to the endocannabinoid-CB 2 -R axis. In a mouse model of PH induced by left pulmonary artery occlusion, we found that CB 2 -R-deficient (Cnr2 -/- ) mice had greater cardiomyocyte hypertrophy and increased Fulton index. The aforementioned effects of cannabinoids on pulmonary vascular tone and the new report on the potential beneficial effects of CBD in animal models of PH may provide a basis for further research. Among cannabinoids, it may be useful to explore new treatments for PH, especially when it is possible to create synthetic cannabinoids with selective and more concentrated action. 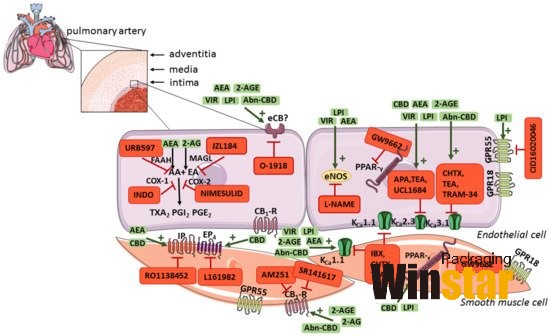 Cannabinoids play a role in modulating pulmonary vascular tone through endothelium-dependent or receptor-based mechanisms (above), which may help reduce pulmonary resistance. Furthermore, an endocannabinoid negative feedback mechanism in the pulmonary artery was found to be responsible for attenuating agonist-induced vasoconstriction, which may also play an important role in the treatment of PH. CBD is approved by the U.S. Food and Drug Administration and the European Medicines Agency for the treatment of drug resistance in adult patients with multiple sclerosisSeizures and spasms, also have a protective effect on the vascular endothelium, reduce RVSP and/or cardiac remodeling and increase the saturation of experimental PH, and its vasodilatory effect on the pulmonary artery. Therefore, (endo)cannabinoids represent a potential new therapeutic strategy as an add-on therapy for PH. Nonetheless, it should be emphasized that no clinical trials of cannabinoids for the treatment of PH have been conducted; therefore, their therapeutic potential has not yet been translated into clinical practice. In addition, a single experimental study showed that AEA and 2-AG can constrict blood vessels and/or increase PAP. Further experimental and clinical studies are needed to explain these inaccuracies. Cannabis birthplaceCannabis is a native plant that is abundant throughout the world, native to the temperate regions of Asia and Europe. From the assumption that there is a wide distribution in the central part of the continent. from the Caspian Sea to the southern Himalayas and western Siberi

What is the effect of cannabinoids?

Currently, no treatment can completely cure pulmonary hypertension (PH), which can lead to right ventricular failure and thus death. Cannabinoids, a group of lipophilic compounds that interact with cannabinoid receptors, have potential beneficial effects on pulmonary circulation and pH.Pulmonary hyp